The Future of Detroit 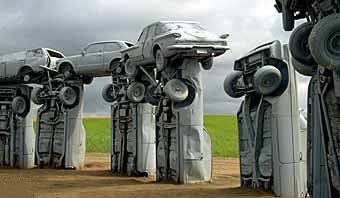 Just north of Alliance, Nebraska, along Highway 87, stands Carhenge, a replica of Stonehenge, England's ancient mystical alignment of stones that charts the sun and moon phases.  Stonehenge stands alone on Salisbury plain in England. Carhenge, created from vintage American-made automobiles, towers over the plains of Nebraska.  It symbolizes the folly of Detroit for not adapting to the changes that the market needed in the 1970's.  It is very fitting to think of it now, given the current folly of Detroit failing to build hybrid cars.  Several hybrid models are available from overseas-owned competitors but few have been developed in Detroit.

Back to Index Page